When I first moved in to a place of my “own” (rented with roommates), my parents were kind enough to purchase a mattress and box spring, figuring that getting a good quality mattress would pay dividends in terms of health and well-being. This mattress was purchased during a promotion that included a cheap metal frame on which to place the bed. For approximately three years, this frame endured a few different conditions, namely a basement apartment that was a tad too humid, rendering it somewhat rusty. Finally, upon arriving in Saint John, I vowed I would restore the frame to a rust free state. Today was the day I finally got around to the project. 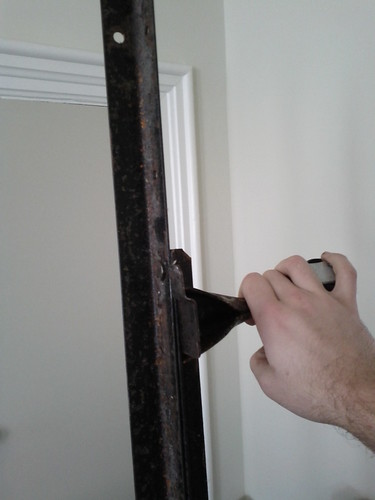 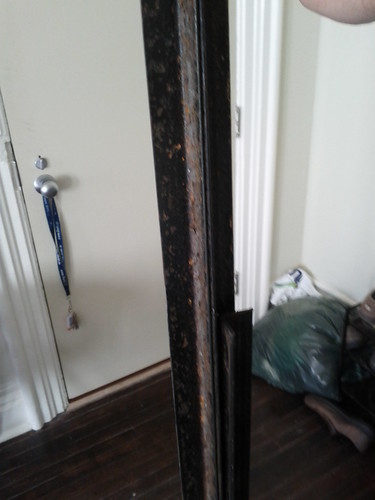 I picked up some red Tremclad paint from my parents’ basement, as red was the only colour they had. This included spray-on primer and brush-on paint. I also scavenged for some 100-grit sandpaper, as they had nothing more coarse. I used the sandpaper to remove the rust from the frame, which was a long, slow task given that it was the wrong tool for the job. Eventually, I finished that and went outside to the parking lot to apply the primer, which ran out less than 1/3 the way through the job, so off I went to Kent building supplies way out in the east end.

This is where the project took a turn for the worst: since my parents bought that paint years ago, Tremclad had improved their products by going primer-free. Since I was looking for something similar to the primer I’d started with, I opted for the spray can of red paint. Getting home, I started painting, but there was a light wind, and it didn’t work very well & a fair bit of paint was consumed, making an awful mess of everything. Why I didn’t stick to my original plan and use brush on paint is beyond me.

Oh well, here’s a look at the finished product, one of the few red bed frames you’ll ever see. Having completed it, I realize I have possibly freed myself from the Wedge Family Curse: a renowned inability to finish any projects. 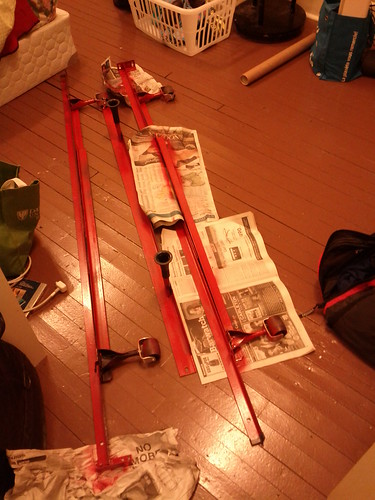