My next purchase (after a kettle for brewing) will be an SLR camera. I’m going to get a used rig, likely a Nikon due to a long-standing admiration of their products, and then build a lens collection on top of the initial buy. Since I can’t get that now, as a student (but maybe this fall? Who knows?) I decided to take mom’s camera for a spin. Mom received a Nikon D40 nearly 5 years ago for Christmas. Unfortunately, she never cared nor had the desire to care for the capabilities for her camera, and my attempts to swap her camera for my point and shoot never panned out. While the D40 is no superb camera, it does have some neat capabilities. (The camera I used is a D40X, the as the D40 was removed from our possession along with our other electronics in September 2007).

To make a long story short, mom lost the box for her camera which included a viewfinder cover, and we don’t have a remote trigger. Despite these shortcomings, I attempted some long-exposure shots of Summerside Harbour under our full moon. The shot linked below was taken around 11:15PM on Friday night, and is full of artefacts due to shakiness of covering the back and pressing the trigger. It’s a start. 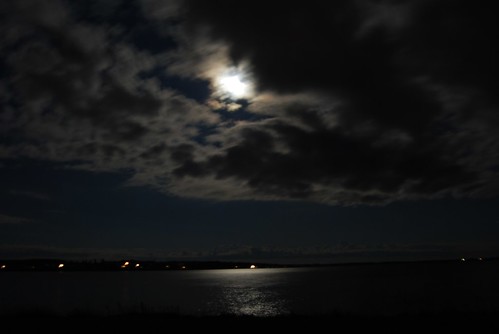